Vellai Thamarai in a nonprofit Indian association in charge of implementing the educational and social project of its founders. Mr S. Anandavadivelou  serves as President, and Executive Committee members are all volunteers. The school and its activities are run by local managers who ensure the implementation of decisions.

The French association’s mission is to promote Vellai Thamarai and to obtain the financing for its development in Puducherry. 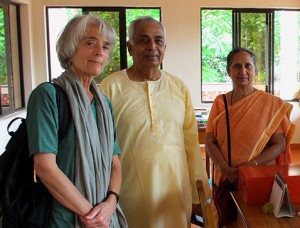 Under the honorary Chairmanship of Selvi Sarkar operational responsibility is assumed in France by Marie Hélène Demey, President, and members of the Board, all volunteers. Donations are tax deductible in France.

“Vellai Thamarai India Educational, Social & Cultural organization”, was established in 2006 under the Societies Registration Act XXI of 1860 and its headquarters are in Puducherry (official name of Pondicherry in tamoul). Its Board of Directors is composed of 7 members, having as President Mr S. Anandavadivelou.

Vellai Thamarai France, an Association under the law of 1901, was established in 2006. Its headquarters are in Paris 14th. Board members are: