Home > The Association > Facts and Figures

The 2020-2021 fiscal year (April 1st ro March 31st) passed entirely under the Covid sign. For our 240 students, the Vellai Thamarai School has been closed as all schools in India; but a progressive return to school has been  authorized from September 2021. Yet, during the 20-21 year, our students from under-priviliedged families have received some distant teaching, but obviously no meal, no uniform, nor any of what is delivered by the School in normal times. As of the June 2022 school year a modest contribution to tuition fees has been asked to parents.

Annual school operating expenses reflect this exceptional lock down situation : 92.022 €, ie a decrease of 27% stemming for 2/3 from cost savings and 1/3 from favorable exchange rates. Savings concerned all variable costs, an particularly on meals normally offered to around 300 people daily. But all salaried personnel have been maintained in employment; the wage bill has benn maintained at a constant level, representing 85% of total operation costs (vs 70% the year before).
For the current year, operating costs are expected to return to their pre-Covid level, under strict control, with students fully back to school soon, it is hoped. The chart hereunder shows the evolution of operating costs over the last 6 years. 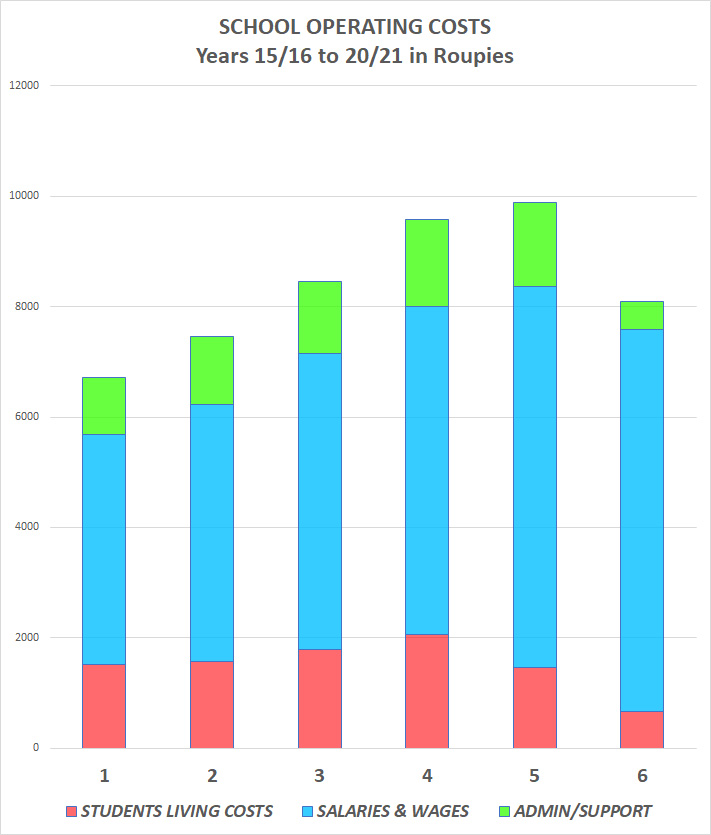 Over the last 3 years, total yearly receipts amounted from 150 000 € to 200 000 €, proceeding maily from member fees, donations and workshops. But for the past “Covid year”, workshops could not be held and total receipts would have collapsed without the remarkable contribution of Vellai Thamarai friends in  response to a call for exceptional donations : around 64 000 € were missing to cover school salaries and other operating costs.

For each column of the chart below, annual receipts per source are stacked from bottom up :
(A=fees and donations, B=workshops, C=grants, D=events). The 2 columns on the right indicate for the last year receipts without exceptional donations and including them (vertical streaks). This allowed to re-establish a cash level permitting the payment of all wages in arrear. 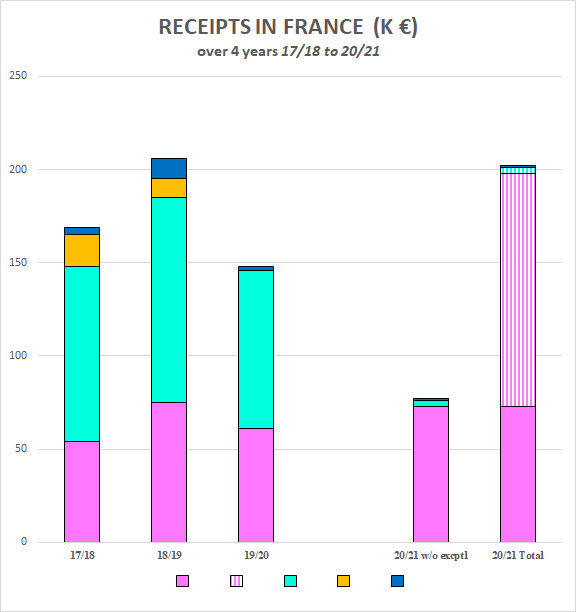 Ajit and Selvi Sarkar’s personal financial commitment allowed the start of the project and provided for initial investments.

Sources of funds have been strongly impacted by Covid during the last fiscal year :

• Yoga and Ayurveda workshops run by Ajit and Selvi Sarkar in Puducherry and in France had te be cancelled, and this has represented a revenue shortage around 90 000 €.

• Fees and individual donations from Vellai Thamarai friends (over 600) jumped to 198 000 € in response to an exceptional appeal; this testifies of our members extremely generous support over time.

The pandemic environment with its economic and social consequences make it difficult to seek for fund sources. But we maintain our effort with urgency and determination.

During years 2017 to 2019, operating costs showed an average annual increase of 5% (from   112 773 € to 123 587 €) as the number of students rose to 220 and as the average annual inflation rate of 6% had to be passed along on salaries which are established at a modest level, particularly for high school teachers. Other costs are well under control : for example, the per diem cost of meals is stable at 0,26 € per student.

But for the fiscal year closed on March 31 2021 costs incurred in roupies have fallen 18% (27%  in €) as the Covid pandemic has caused the lock down of all schools. Distance teaching has been provided somehow via Whatsapp, in so far as families are equipped. Let’s hope normal processes will resume when students are fully back to school.

To conclude for the current fiscal year : variable costs should revert to their normal, well controlled level as student are back; and payroll will grow modestly in response to inflation.

All investments which were not under way have been postponed or cancelled. Salaried construction team members have worked at the kitchen building first floor; they are finalizing premises to accommodate science labs required for high school classes, as well as the library.

The roof terrace is in the process of completion. Investments for the fiscal year amount to       41 000 €. For the 21-22 current year, it is expected to dig and operate a new well which is urgently required, and also to replace the old school car.