Ajit and Selvi Sarkar, French citizens and natives of Puducherry, were educated at the Sri Aurobindo International Centre of Education in Puducherry. From 1968 they were involved in educational research and training at INSEP in Paris. At the same time, they founded and managed an Indian Cultural Centre, Soleil d’Or, for 30 years. 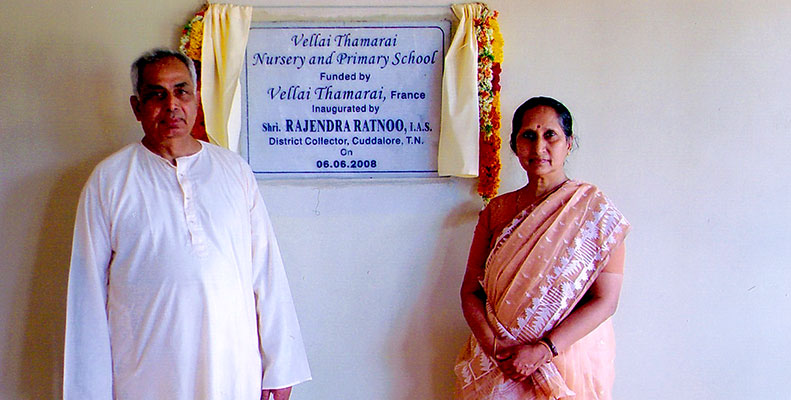 Convinced that only education can help a child exit poverty and gain autonomy, they launched the Vellai Thamarai project in Puducherry in 2006.

Read more
Ajit Sarkar entered INSEP (National Institute for Sport, Expertise and Performance) in 1968 with a scholarship from the French government. At INSEP he built a career in research on health and education, mostly on physical and mental preparation of high performance athletes.

Selvi Sarkar taught sciences in Puducherry while learning classical Indian dance and singing. At INSEP in Paris, she participates in research on the effects of physical education, dance and yoga on mentally handicapped persons.

In 2006, Ajit and Selvi Sarkar launched Vellai Thamarai in Puducherry — a project they had dreamed about for a long time. They provided for initial funding, and had ensured on-the-spot operational management till March 2021.
Ajit Sarkar left his body on March 5th 2021 in Paris.
Since that date, Selvi Sarkar carries on the project of Vellai Thamarai and ensures the internships.

For all those who know them, Ajit and Selvi Sakar’s lives are characterized by energy in action, commitment, determination, creativity , generosity and enthusiasm to pass on their knowledge and values.